This Autumn a group of 25 Young CEVA members traveled to Barcelona. The goal of this trip was to visit a CEVA-site abroad which has another culture, and also: to get to know our other Young CEVA colleagues.

This questions was asked when CEVA asked us whether we would like to visit one of our locations abroad with a group of 25 Young CEVA members. What we would be doing there wasn’t known in the beginning. But, the fact that we were going with a great group of colleagues was clear from the beginning.

On Thursday the 19th October we went to the airport. We departed from different airports in the Netherlands and Belgium. A group went from Eindhoven, a group from Schiphol and our Belgium colleagues joined from Brussel. 3 different groups, 3 different departure times, 3 different airport, one goal: be ready the next day at 10 to visit our site Surabit, a few kilometers outside Barcelona.

After a nice bus ride, which might have started a little later than planned because the driver was late (50 minutes..) we were on our way and the introductions could start. ‘I’m famous from television’ or ‘I used to live in the west of Africa’ are just two of all the different tales people had to tell.

When we arrived, the Managing Director Spain and the Site Manager and HR Manager where waiting for us. In the introduction given by them we found out that of course there are similarities and differences between the different countries and the customers that they service. The most visible difference can be seen in the less hierarchal structure in Spain and the fact that the different positions. In Spain they have 9 engineers which operate through the whole of Spain. In the Netherlands the Engineers operate within a specific region or site. Another big difference is that their Contract Manager would be a Supervisor in the Netherlands, and the Supervisor would be an Assistant. Also, the focus in Spain is on family, relationships, people and social responsibilities. We were all very positive about this.

After the tour we had a great lunch together with the Management of Subirats. This was a perfect opportunities to get to know our Spanish colleagues and build our network. Sometimes we had to use our hands to get over the language barrier, but that’s all part of the game. To finish of this wonderful day, we all went to the local Cava factory and vineyard, where again we received a wonderful tour.
After the bus ride back, it was time to have dinner on top of the mall Arenas de Barcelona, a restaurant with a wonderful view of the city. Some tapas and drinks later it was time to check out Barcelona by night.
The next day we had a bike tour through Barcelona. Afterwards some went to the match FC Barcelona – Malaga, others had a great lunch in the sun.

The trip to Barcelona shows the unlimited possibilities at our big international companies. A lot of the people who joined the trip visited each other afterwards to keep learning from each other. As you can see, everywhere around the world we have our enthusiastic (young) colleagues, beautiful locations and possibilities to make your ambitions come through. Does your ambition match our opportunities? 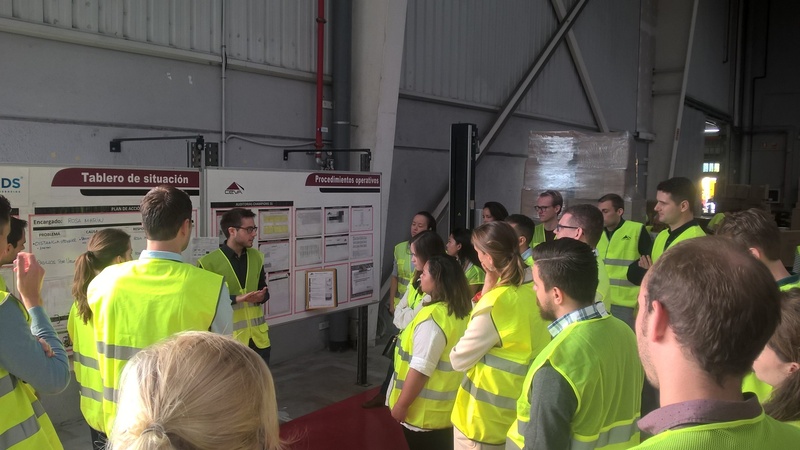 At February 25 more information will follow about the Traineeship, which will start in September 2019.

If you have any questions about the traineeship, please contact Jill Stegers via jill.stegers@cevalogistics.com